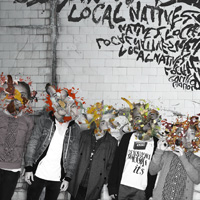 There are moments in life when the joy of the unexpected trumps the predictably incredible. This is rarely truer than when watching a band you know very little about play live as your first real exposure. Enter Local Natives, an LA band who I  happened upon at Coachella, and watched rip through 50 of the most joyous moments of the festival. The blogosphere refers to the band as a kind of “Weekend Foxes,” but to me it more a cross between the percussive side of the Dodos mixed with the intensity of a much bigger band. There are also bits English Settlement era XTC, the rootsiness of Blitzen Trapper and the emotion of the Frames.

With all buzzy SXSW bands, there is a chance to outgrow the hype and really build an audience that extends beyond the tiny clubs of Austin. In an age where many bands can make a great recorded piece of work, the real skill comes in playing live and delivering real energy and authenticity. Local Natives are young, but there songs are big. On “Shape Shifter” think Coldplay, and perhaps My Morning Jacket on “Wide Eyes.”  I listen to them as I write this and can’t help but smile. Not bad for a bunch of kids from Silverlake, CA.

Sign up to get email updates when new posts are published