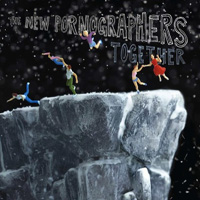 For five records now, indie rock’s most shameless optimists have been pushing the same wonderful pop boulder up and down a most lovely hill. To the unexposed, the Pornographers are one of the rocks most accomplished super groups featuring leader A.C. Newman, of early Zumpano fame, Neko Case the great alt-country goddess, and Dan Behar from the lesser known but incredibly accomplished Destroyer. Together the band creates infectious pop classics, where vocal duties alternate between the angelic Neko, the boyish A.C., and the warbling Behar, with almost “Glee-like” harmonizing throughout.

It is rare for band to make it this far into a career without a record that even remotely resembles a miss. Almost every song on “Together” has the potential to get under your skin, and with “Moves” an anthemic opener, “Crash Years” which already seems like logical soundtrack music, and the ten other addictive epics. Mass success or not, this is a band who has made me smile for years, and “Together” although not in any way groundbreaking is perfect just the way it is.

It took me a month to listen to and process the latest Midlake record before I felt qualified to speak objectively about “The Courage of Others.” I would have to go back to Buckley’s stunning “Grace” fifteen years ago to find another record as important to me as Midlake’s predecessor “The Trials of Van Occupanther.” That record was immediately captivating both musically and emotionally, lifting the best bits from Fleetwood Mac-  a band I never really considered as deeply as perhaps I should have, and combined it with the indie folk I have grown older gravitating towards.

It is rare that I read the reviews of others before attempting my own, but in the case of Midlake my three years of eagerness for the follow-up to left me in some ways too biased to resist the urge. What I found was a massively polarizing reaction to a record that I took longer to fall for than I would have expected. “Courage” is in some ways as satisfying as I could have hoped for, but also perhaps more somber and precious than it needed to be. That said, with every listen, and I have found myself doing so more and more often, I am increasingly drawn into this reflective and emotive masterpiece.

They have grown closer to new influences this time around, but they tend to go further back than Fleetwood Mac, settling into the mid-sixties Brit folk of The Fairport Convention, than they do west coast Americana. Vocalist Tim Smith, has a voice a pure and urgent as anyone making music today, and like previous efforts is bathed in impeccable production. Songs like “Rulers, Ruling All Things” and “Winter Dies” represent the closest approximation to singles or pop songs, but to describe them as such would be to miss the point – this record is takes some getting used to. There is much emotional acclimation, but below the surface where initially there seems pretension, there is joy and hope. The songs build to a triumphant crescendo, and in the end with headphones this is an epic voyage that is both uplifting and contemplative. Just surrender yourself to something truly special, and use the music to help express emotions often to hard articulate.